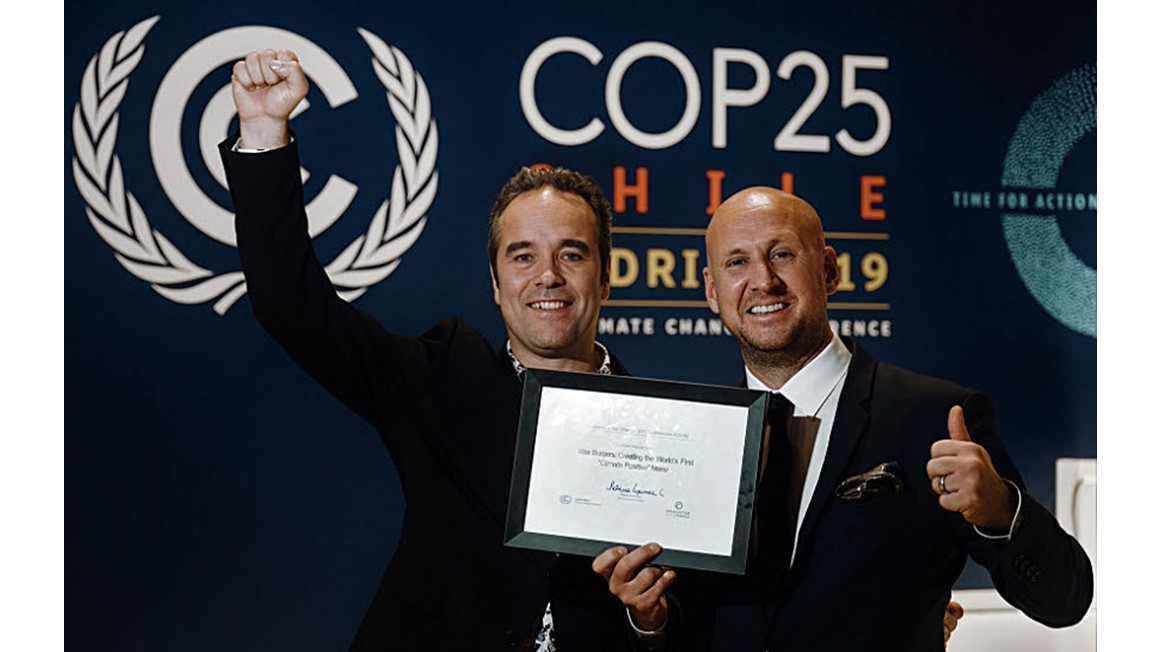 MAX Burgers received “Global Climate Action Award” by the UN at COP25 in Madrid:On December 10th, the Swedish family owned company MAX Burgers received one of this year's UN Global Climate Action Awards. MAX, as the only European company in the Climate Neutral Now category, was awarded for their work with climate positive products, a scalable solution adapted by eight companies already. Now MAX is aiming for inspiring to a movement of climate positive products as well as establishing a global standard for climate positive.

Out of 670 nominations, UNFCCC* awarded 15 organisations in four categories. MAX received the prize for their long-term work with sustainability and for becoming climate positive during 2018. The Swedish burger chain was the only European company to be awarded in the category "Climate Neutral Now".

In order to reach the target of limiting global warming to 1,5⁰C degrees, it is essential that more companies go beyond climate neutral to climate positive. As of today, 18 months after MAX became climate positive, eight  companies have joined the movement by offering climate positive products and services. And even more organisations have announced their plans to join.

- This is really amazing; the award shows that a burger chain can rethink and innovate. Accountability and sustainability are the foundation which companies should rest upon. We are dedicated to spread knowledge about what climate positive is, since we want to inspire other businesses and help our guests make more sustainable choices. We are proud to be awarded for all our climate work during the last decade as well as for leading climate positive, says Christoffer Bergfors, Vice President of MAX Burgers and present at the award ceremony.

Since 1968 when Curt Bergfors, founder and working chairman, established MAX Burgers, has sustainability been a core value of the Swedish burger chain. In 2008, MAX Burgers became the world's first restaurant chain to climate label the menu and carbon offset for 100 percent of all emissions. In 2016 a new menu was launched, and the non-meat-options were five-fold, which already has lowered the company’s climate impact by 18 percent. The mission is that by 2022, every other sold burger should be something other than red meat. In June 2018, MAX Burgers launched their entirely climate positive menu.

- With climate positive we offer a solution that removes more carbon that it emits already today and at the same time includes a long term transition to the global 1,5⁰C degree target. The contribution is not small, with climate positive we create a 147 times more climate effect than if we would just have reduced our own emissions because we include the whole value chain and because we capture 110 percent of all emissions every year, says Kaj Török, CRO and CSO at MAX Burgers.

Become a part of the MAX family.

We are using cookies and tracks your usage of our digital channels to be able to better adapt our communication with you. If you do not approve, or want more information, read our integrity policy.